North Korea warns the US over going to war

North Korea warns the US over going to war

Still room for U.S. and North Korea to make a deal, Trump suggests

NORTH Korea has a stark warning for anyone thinking of heading to war with the rogue nation — do it and face death.

In a news article published on Rodong Sinmun, a North Korean newspaper often regarded as a source of official North Korean viewpoints, the paper accused the US of “digging their own grave”.

Translated by the Korean Central News Agency, North Korea’s state news company, the article claimed the US was “bluffing” when they presented a “plan for military counteraction” against North Korea.

It also labelled America’s effort to be firm with North Korea as “nothing but desperate efforts” from “cowards” who were “astonished” by the “great advance” of the rogue nation.

The article once again labelled North Korea’s hydrogen bomb test “a complete success” and said America’s “aggressive moves clearly demonstrated the tremendous might of the DPRK capable of smashing any provocation of the hostile forces at a blow”.

In another direct threat to the US, the article stated “the US mainland is at stake and its nuclear umbrella has become useless”.

The article went on to slam South Korea as “Trump’s puppets” and said they are “inviting a barrage of fire” and “digging their own grave” with their ambition to invade the north.

“Only corpse and death await the war maniacs,” it added.

“The military confrontation racket of the U.S. and South Korean puppet forces will end with their doom,” the article ended. 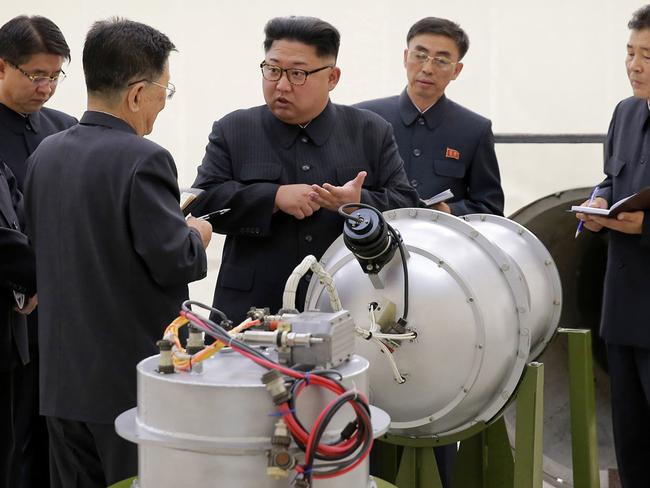 Despite the sensational language, experts have cautioned against buying into the DPRK’s propaganda.

“North Korea has resorted to aggressive rhetoric in the past,” Derek Bolton, Political Science Professor at the University of Bath told news.com.au.

“Their threats often seem very alarming, but most North Korea observers, and I’m sure diplomats, quickly learn to take threats of turning Seoul into a ‘Sea of Fire’ not too seriously. I think it is a strategy that has been used by North Korea, which is essentially an economically weak country with a fairly antiquated military, to leverage its influence and get what it wants.

Professor Bolton said what is new — and potentially very dangerous — is the participation of a US President willing to match North Korea’s threats.

“This potentially adds a much more destabilising factor into the equation. If North Korea’s actions are primarily driven by its sense of insecurity driven by a strong US military presence in Northeast Asia, the prospects of a cycle of threat and counter-threat by the US could be very dangerous.” 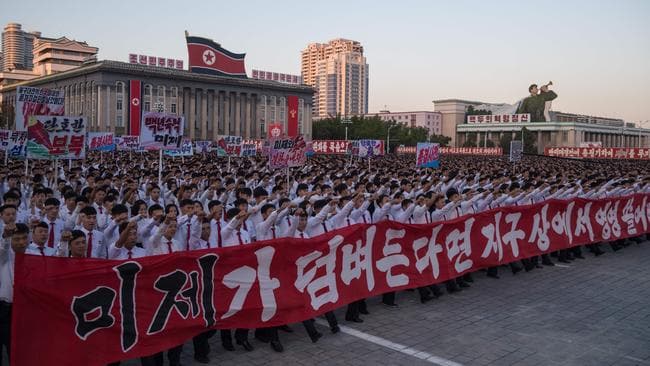 Tensions between North Korea and the US have reached new heights after the Trump administration sought to punish the rogue nation for its ICBM test launches via UN sanctions.

China also recently announced sanctions on North Korea, stating it will limit oil supplies to the rogue nation under tough UN restrictions, stepping up pressure on Pyongyang over its pursuit of nuclear and missile technology.

China’s announcement of sanctions last month came days after President Trump warned the US would “destroy” the rogue nation with its own sanctions.

The world leaders spoke on the phone on September 18 where they both committed to “maximising pressure on North Korea” and discussed “North Korea’s continued defiance of the international community and its efforts to destabilise Northeast Asia,” a statement from the White House said.

Following Mr Trump’s warning, Kim issued a rare statement about the sanctioningcalling the US President deranged and said he would “pay dearly” for his threats to destroy North Korea.

“Far from making remarks of any persuasive power that can be viewed to be helpful to defusing tension, he made unprecedented rude nonsense,” Kim said.

“He is unfit to hold the prerogative of supreme command of a country, and he is surely a rogue and a gangster fond of playing with fire.”