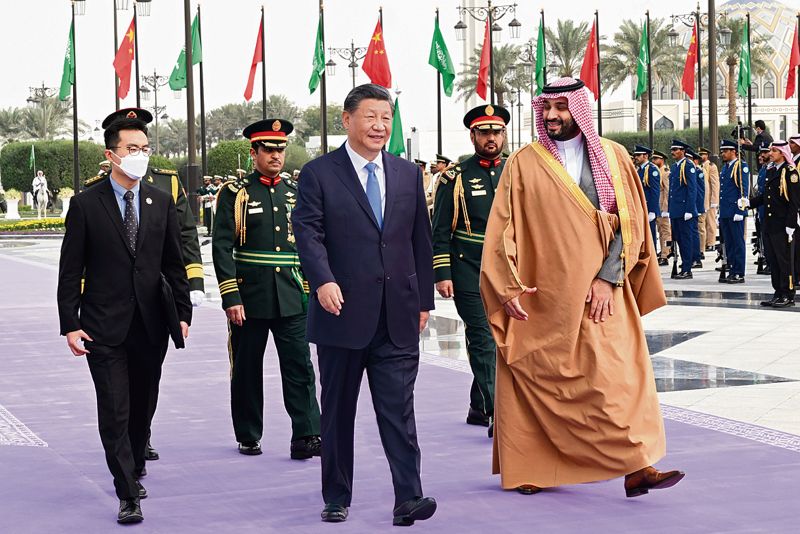 “The People’s Republic of China welcomed the Kingdom’s role as a supporter of the balance and stability in the world oil markets, and as reliable major exporter of crude oil to China,” said a joint statement published by Riyadh’s state-owned Saudi Press Agency.

China is the world’s largest crude oil importer, while Saudi Arabia is the greatest exporter of such resources and chairs the influential OPEC+ producers’ alliance.

Xi met both King Salman bin Abdul-Aziz Al Saud and his heir, Crown Prince and Saudi Prime Minister Mohammed bin Salman, according to Chinese official news agency Xinhua. The talks have so far resulted in the signing of a “comprehensive strategic partnership agreement” and 12 agreements and memoranda of understanding in topics including hydrogen, direct investment and economic development.

The two countries on Friday affirmed they will continue to “firmly support each other’s core interests,” sovereignty and territorial integrity, further pledging joint cooperation to ensure the “peaceful nature of Iran’s nuclear program” and urging Tehran’s cooperation with the International Atomic Energy Agency.

The Chinese head of state has extended an invitation for King Salman to visit China “at a mutually convenient time,” the statement said.

Xi arrived in Riyadh on Dec. 7 for a three-day visit at a time when Beijing seeks to revitalize its economy, while Saudi Arabia nurtures eastern relations after an energy policy conflict with the U.S.

Washington closed a rift with Riyadh on Dec. 6 with the District of Columbia federal court dismissal of a lawsuit against Saudi Crown Prince Mohammed bin Salman, accused with the killing of dissident U.S-based journalist Jamal Khashoggi. The decision followed a recommendation from U.S. President Joe Biden’s administration that the prince should receive sovereign immunity, after his appointment as Saudi prime minister through an exemption of Riyadh’s governing code, weeks prior.

Saudi-U.S. energy interests continue to diverge. Washington has repeatedly urged OPEC+ to release further crude supplies into the markets and ease the toll on consumers that contend with limited energy access in the wake of Russia’s Ukraine invasion and resulting sanctions. The OPEC+ October decision to reduce production quotas by 2 million barrels per day starting in November, which was upheld on Dec. 4, led to a brief war of words between U.S. and Saudi officials.

The timeline of China’s economic rebound frames the demand outlook in the crude markets, which remain rattled by concerns over broader global appetite for transport fuels amid mounting inflation rates and recessionary signals.

On the supply side, energy markets await further clarity on the Russian production impact of an EU ban that came in force on Dec. 5. Alongside it’s implementation was a program by the G-7 largest global economies that seeks to facilitate shipping and transport services for non-G7 Russian purchases transacted under a price cap.

The Brent crude contract for February delivery was trading at $76.13 per barrel at 11:55 a.m. London time Friday morning, down by 2 cents from the Dec. 8 settlement. The front-month Nymex WTI contract was at $71.79 a barrel, adding 33 cents from Thursday’s close price.