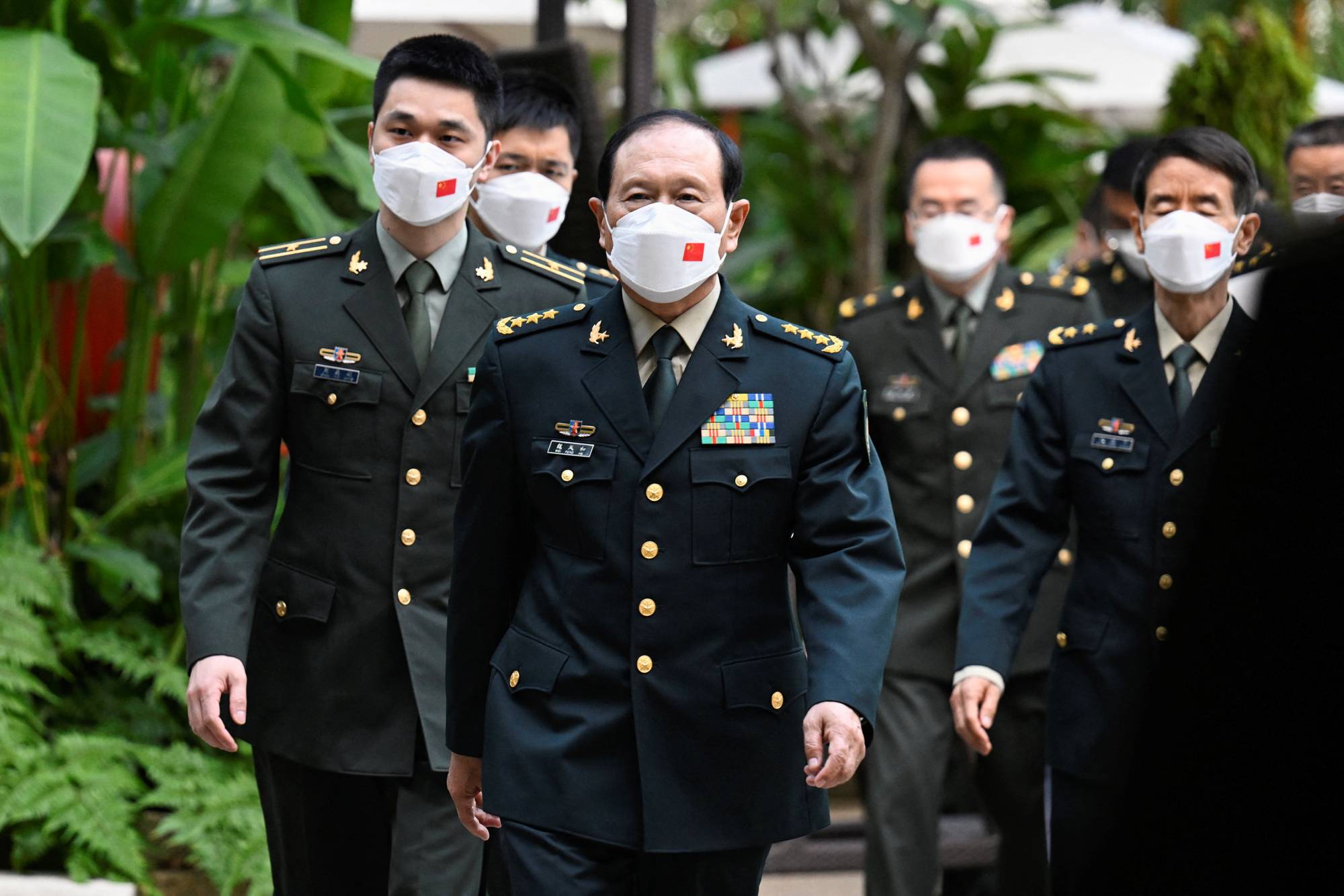 Beijing will “not hesitate to start a war no matter the cost” if Taiwan declares independence, China’s defence minister, Wei Fenghe, was reported as telling his US counterpart, Lloyd Austin, as they met on the sidelines of the Shangri-La Dialogue security summit in Singapore.

Austin called on China to “refrain from further destabilising actions” on Taiwan, a US statement issued after their first round of talks said.

The US defence department said Austin “reaffirmed the importance of peace and stability across the [Taiwan] Strait, opposition to unilateral changes to the status quo, and called on [China] to refrain from further destabilising actions toward Taiwan”.

Tensions over Taiwan have escalated in particular due to increasing Chinese aircraft incursions into the island’s air defence identification zone (ADIZ). President Joe Biden said during a visit to Japan in May that Washington would defend Taiwan militarily if it was attacked by China. The White House has since insisted its policy of “strategic ambiguity” over whether or not it would intervene has not changed.

In a speech at the Shangri-La summit on Saturday, Austin blasted China’s “provocative, destabilising” military activity near Taiwan and said the US would do its part to manage tensions with China and prevent conflict despite Beijing becoming increasingly aggressive in the Asia-Pacific region. He said the US would continue to stand by its allies, including Taiwan.

“That’s especially important as the PRC [China] adopts a more coercive and aggressive approach to its territorial claims,” Austin said. There had been an “alarming” increase in the number of unsafe and unprofessional encounters between Chinese planes and vessels with those of other countries, Austin said.

Earlier, Wei Fenghe reportedly told Austin that Beijing would “smash to smithereens any Taiwan independence plot and resolutely uphold the unification of the motherland”.

With concerns mounting over China-Taiwan tensions, Japan’s prime minister, Fumio Kishida, said in a keynote address to the summit that his government would consider acquiring a preemptive strike capability because “Ukraine today may be east Asia tomorrow”.

The world must be “prepared for the emergence of an entity that tramples on the peace and security of other countries by force or threat without honouring the rules”, he said. He did not mention China by name in his address, but repeatedly called for the “rules-based international order” to be upheld.

Kishida said he would lay out a “free and open Indo-Pacific plan for peace” by next spring in which Japan would provide development aid, patrol boats, maritime law enforcement capabilities and other assistance to countries in south-east Asia and the Pacific to help them better guard themselves.

Japan would provide such support to at least 20 countries, train at least 800 maritime security personnel and provide about $2bn in assistance over the next three years, he said.

Kishida told his audience that Japan’s defence enhancement would be transparent and within the scope of its constitution.

He said the security environment in the Indo-Pacific region was deteriorating because of increasing tensions in the East and South China seas and around Taiwan.

Russia’s invasion of Ukraine and its threat to use nuclear weapons had made things worse but the trend must be reversed, Kishida said, noting his position as the leader of the only country that has suffered nuclear attacks.

“I must admit that the path to a world without nuclear weapons has become even more challenging,” Kishida said.

He described North Korea’s repeated launches of ballistic missiles, including ICBMs, and development of nuclear weapons as a serious threat to regional peace and stability. “The non-transparent buildup of military capacity, including nuclear arsenals, around Japan has become a serious regional security concern,” he said.

The threat may damage non-proliferation efforts by creating a reluctance among possessors of nuclear weapons to abandon them, and a desire among others to develop them, Kishida said.

Austin said in his speech, which focused on the US commitment to Asia, the US would maintain its presence in the region but Washington understood the need to prevent conflict.

“We do not seek confrontation or conflict. And we do not seek a new Cold War, an Asian Nato, or a region split into hostile blocs,” he said.

Austin also referred Ukraine, which has been a priority in Washington and other western capitals over the past three months. “Russia’s invasion of Ukraine is what happens when oppressors trample the rules that protect us all,” Austin said. “It’s a preview of a possible world of chaos and turmoil that none of us would want to live in.”

As well as on Taiwan, China and the US have been at loggerheads over Russia’s invasion of Ukraine, with Washington accusing Beijing of providing tacit support for Moscow.

China has called for talks to end the war, but has stopped short of condemning Russia’s actions and has repeatedly criticised American arms donations to Ukraine. China’s expansive claims in the South China Sea have also stoked tensions with Washington.

Wei is to deliver a speech at the forum on Sunday. The summit runs from 10-12 June and is taking place for the first time since 2019 after twice being postponed due to the Covid-19 pandemic.