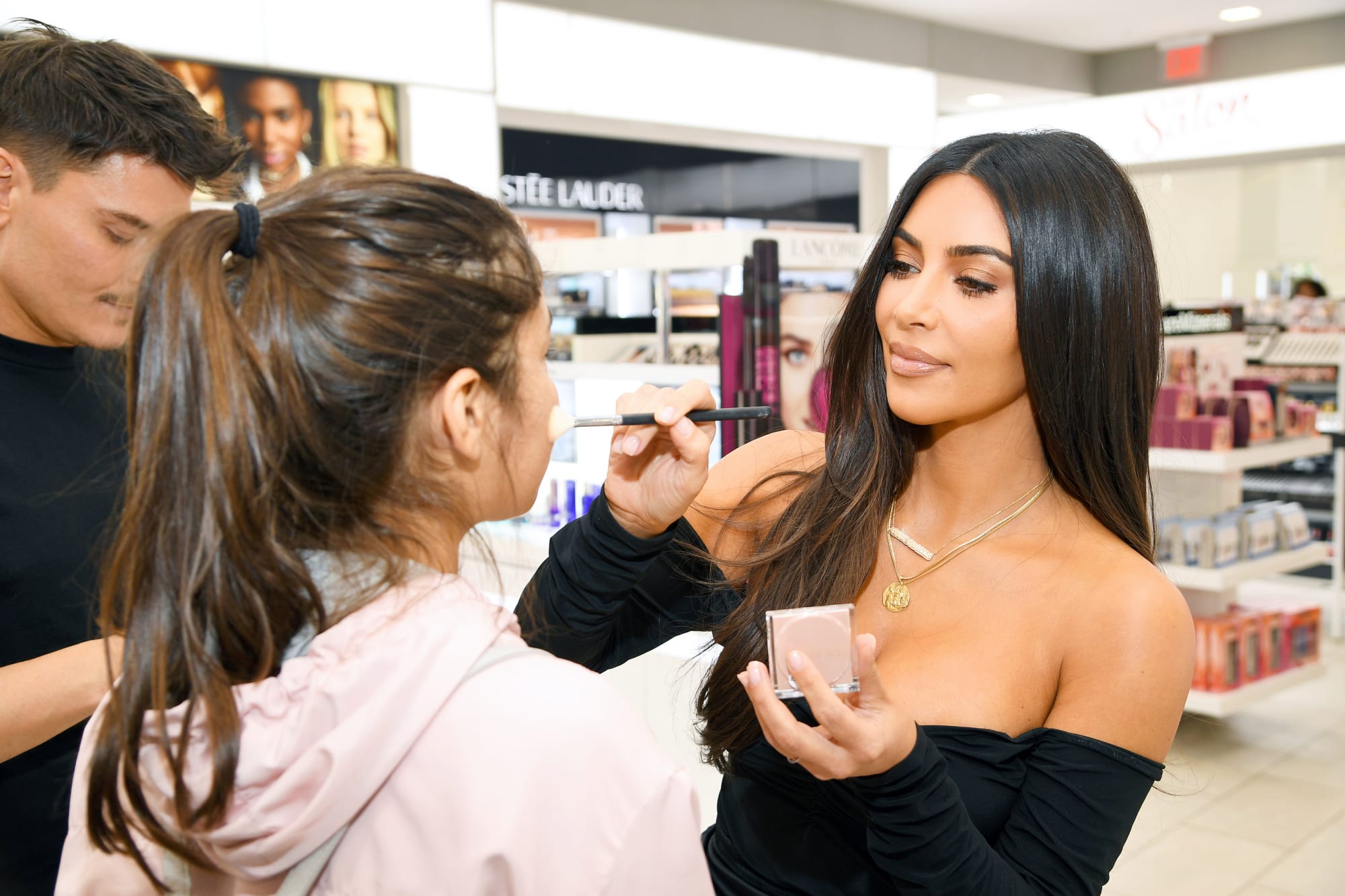 Kim Kardashian made a big business announcement via social media on Wednesday morning.

The 41-year-old reality TV star wore a nude bra top and matching skirt as she introduced her nine-piece skincare line named SKKN BY KIM which will be made available later this month.

It is her first new business since she divorced rapper Kanye West and does not include his last name which her past brands, KKW Beauty and KKW Fragrance, did.

In her caption the mother-of-four said she was ‘excited’ to introduce the line which uses ‘science-backed ingredients.’

Kim went light on the makeup as she chose to focus on her clean, clear skin in her new photo shoot where she sat on round gray concrete pillars.

‘I’m excited to finally introduce to you SKKN BY KIM, a rejuvenating nine-product skincare ritual that I have developed from start to finish,’ began the daughter of Kris Jenner.

‘I’ve been so privileged to learn about skin and skin care over the years from the world’s top dermatologists and estheticians, and every bottle from my new line is filled with the knowledge I’ve accumulated along the way,’ added the Selfish author.

‘You will experience refillable packaging, and clean, science-backed ingredients designed to nourish all skin types, tones, and textures at all stages of maturity.’

And she wants her fans to feel good about her product: ‘I created this line so that everyone can feel confident in their skin, and I can’t wait to finally be able to share it with you!’

SKKN BY KIM is launching on June 21 at 9a PT / 12p ET exclusively on SKKNBYKIM.COM.

‘In the meantime, be sure to follow @SKKN,’ Kim added.

The photos were by famed Italian shutterbug Mario Sorrenti,  who has worked with Kate Moss and Hailey Bieber.

Kim told Allure, ‘I didn’t want to launch with three or four products like it was recommended [to me] at the beginning because that’s not my skin-care routine,’ she said.

‘That’s not realistic for me.’

And she tested on Kris’ mom MJ.

‘I gave my grandma all the samples, I gave a focus group of people that were my friends that are my age to my cousin who’s my mom’s age, to see how everyone felt about the line,’ she stated.

‘It’s important to not have an age cap on it. It could be up to a really mature skin.’

In the spring of 2021 the TV star filed trademark documents in order to secure the rights to the skincare line.

But SKKN is not just for skincare.

The documents suggested that Kim will attach the brand name to a wide range of products, including fragrances and cosmetics, as well as products for skin, hair and nails.

Kylie Jenner has already launched her own skincare line with Kylie Skin, and Kim – who launched her own beauty line, KKW Beauty (which has since ended), in 2017 – will be hoping to emulate her success in the industry.

Kim previously admitted that she approached Keeping Up With the Kardashians as a business opportunity and a chance to increase her profile.

She explained: ‘When the opportunity for our TV show came about, I wanted to do it to bring attention to our stores [which she’d opened with her sisters]. I was thinking this might not last very long, but we’ll grow a great business and expand online.

‘I thought it would be great press. I didn’t think it would turn into what it turned into.’

Kim has 314million followers on Instagram, and has admitted to looking at herself as a brand.

‘I think they blend together, but I have different qualities or interests that my sisters might not be so into. But no matter what, we’re family and super close. I think the brand will always represent family.’