Home » Blog » Malaysia GE15: BN to take part in unity government but not one led by PN, says UMNO 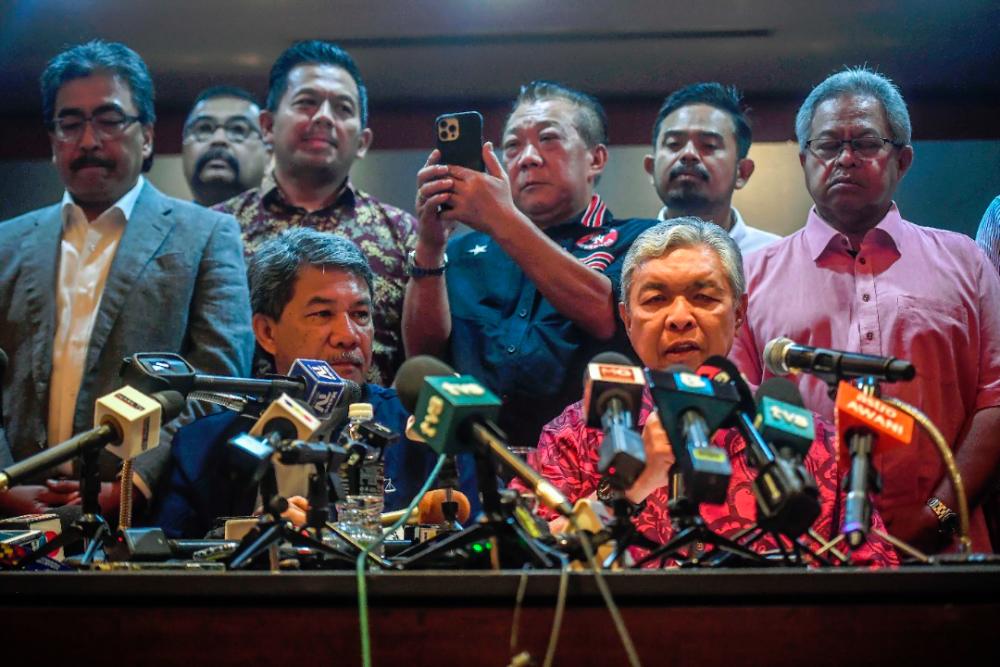 However, the party stressed that it will not be part of a unity government led by the Perikatan Nasional (PN) coalition, which is headed by Mr Muhyiddin Yassin.

In a statement released early on Thursday morning (Nov 24) after an UMNO Supreme Council meeting, the party’s secretary-general Ahmad Maslan said: “The (UMNO) supreme council has considered carefully the main points following the discussion between BN with Pakatan Harapan (PH) and Perikatan Nasional.

On Monday, PH and BN leaders met at the Seri Pacific hotel to discuss the formation of the new government. Mr Anwar said later that he was very pleased with the progress of the discussions.

Local media also reported that some BN and PN heavyweights were holding talks at the St Regis hotel in Kuala Lumpur on Wednesday. Citing party sources, local media reported that the meeting was to hear Mr Muhyiddin’s case for a unity government.

In his statement, Mr Ahmad Maslan added that the UMNO supreme council shall adhere to and accept the formation of a unity government or any other government structures that will be stipulated by the king.

On Wednesday morning, BN chairman Ahmad Zahid, his deputy Mohamad Hasan and the coalition’s secretary general Zambry Abdul Kadir were seen driving into the palace grounds for a royal audience with King.

Mr Ahmad Zahid was later quoted as saying by Malaysiakini that the King had decreed that all of BN’s 30 MPs must take part in a unity government.

BN had been seen as a kingmaker after the 15th general election (GE15) result saw a hung parliament scenario, with both PH and PN coalitions in the running to form a new government.

Former prime minister Muhyiddin Yassin’s PN trailed with 73 seats, which means neither coalition had the numbers for an outright majority of 112 seats in a 222-seat parliament.

Both leading coalitions had been courting potential partners to amass the numbers needed to form the government.

BN, after talks with PH and prolonged internal deliberations, announced on Tuesday that it would back neither PH nor PN, opting instead to stay as the opposition.

After the king summoned both Mr. Anwar and Mr Muhyiddin on Tuesday afternoon in a bid to resolve the impasse, the PH leader told reporters that the ruler has yet to make his decision.

In a separate press conference, Mr Muhyiddin said that the king has asked PH and PN to form a unity government. But PN turned down the suggestion.

On Wednesday, the palace announced that the king will hold a special meeting with his fellow rulers on Thursday to seek their views on the impasse over the formation of a new government.

The purpose of the special meeting with Malay rulers is for the king to get their views before making a decision for the interests and stability of the country and people, according to the palace statement.

Measles is an ‘imminent threat’ worldwide, CDC and WHO report finds
Kazakhstan continues friendship with Russia