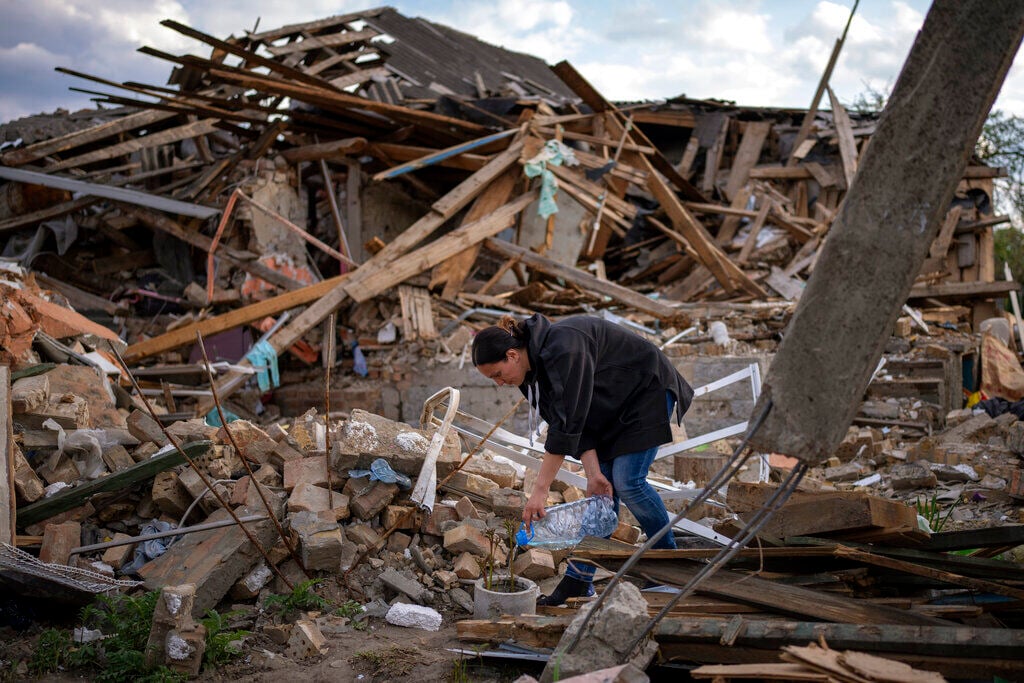 Russia unleashed a new missile onslaught on Ukraine’s battered energy grid Wednesday, robbing cities of power and some of water and public transport, too, compounding the hardship of winter for millions. The aerial mauling of power supplies also took nuclear plants and internet links offline and spilled blackouts into neighbor Moldova.

Multiple regions reported attacks in quick succession and cascading outages. Ukraine’s Energy Ministry said supplies were cut to “the vast majority of electricity consumers.” Lviv’s trams and trolleybuses stopped running as the city in western Ukraine lost both power and water, the mayor said. All of Kyiv lost water, the capital’s mayor said. Power also went out and public transport stopped in Kharkiv, the mayor of that northeastern city, Ukraine’s second largest, said.

Addressing it later on Wednesday, Zelenskyy said that Ukraine will put forward a resolution condemning “any forms of energy terror.” Referring to Russia’s likely veto, he said, “it’s nonsense that the veto right is secured for the party that wages this war, this criminal war.”

“We cannot be hostage to one international terrorist,” Zelenskyy said, saying the council must act.

He also invited the U.N. to send experts to examine and evaluate Ukraine’s critical infrastructure.

“I was going up the escalator, I heard an explosion. Then the electricity suddenly disappeared,” said Kyiv subway passenger Oleksii Kolpachov. “When I got out of the subway, there was a column of smoke.”

Russia has been pounding the power grid and other facilities with missiles and exploding drones for weeks, wreaking damage faster than it can be repaired. Strikes had already damaged around half of Ukraine’s energy infrastructure, Zelenskyy said before the latest barrage, and rolling power outages had become the horrid new normal for millions.

Ukrainian officials believe Russian President Vladimir Putin is hoping that the misery of unheated and unlit homes in winter’s cold and dark will turn public opinion against a continuation of the war — but say it’s instead strengthening Ukrainian resolve.

Ukraine’s Air Force said Russia launched around 70 cruise missiles and 51 were shot down, as were five exploding drones. The afternoon timing of the barrage — as was also the case last week — left workers toiling into the winter darkness to restore supplies.

Russian U.N. Ambassador Vassily Nebenzia told the Security Council that Moscow is carrying out “strikes against infrastructure in response to the unbridled flow of weapons to Ukraine and the reckless appeals of Kyiv to defeat Russia.”

In Kyiv, a city of 3 million, the administration said water and heating would only return to residential buildings on Thursday morning.

Late Wednesday and well after dark, the deputy head of Ukraine’s presidential office said that Kyiv and over a dozen regions, including Lviv and Odesa in the south, had been reconnected to the power grid.

“We cannot trust a regime that leaves us in the dark and cold, that intentionally kills people, out of a simple desire to keep other peoples in poverty and humiliation,” Sandu said.

German Chancellor Olaf Scholz called Russia’s waves of strikes in recent weeks “intolerable” and said: “This bombing terror against the civilian population must stop, and immediately.”

U.N. political chief Rosemary DiCarlo said at the Security Council meeting on Wednesday the U.N. demands that Russia immediately stop the attacks, which violate international humanitarian law, stressing “there must be accountability for an violations of the laws of war.”

U.S. Ambassador to the U.N. Linda Thomas-Greenfield said that Putin is “weaponizing winter to inflict intense suffering on the Ukraine people.”

“He has decided that if he can’t seize Ukraine by force, he will try to freeze the country into submission,” she said.

Ukraine’s state-owned nuclear operator, Energoatom, said the country’s last three fully functioning nuclear power stations were all disconnected from the power grid in an “emergency protection” measure. It said radiation levels were unchanged at the sites and “all indicators are normal.”

The Energy Ministry said the attacks also caused a temporary blackout of most thermal and hydroelectric power plants, and also affected transmission facilities. Repair teams were working “but given the extent of the damage, we will need time,” it said on Facebook.

Wednesday’s blackouts also caused “the largest internet outage in Ukraine in months and the first to affect neighboring Moldova, which has since partially recovered,” said Doug Madory, director of internet analysis at network-monitoring Kentik Inc.

The onslaught followed an overnight Russian rocket attack in the town of Vilniansk, close to the city of Zaporizhzhia in southern Ukraine, that destroyed a hospital maternity ward, killing a 2-day-old newborn boy and critically injuring a doctor.

“The first S300 rocket hit the road. The second rocket hit this place, the main general hospital, at the maternity wing,” said Mayor Nataliya Usienko. “One woman gave birth two days ago. She delivered a boy. Unfortunately this rocket took the life of this child who lived only two days.”

The strike adds to the gruesome toll suffered by hospitals and other medical facilities — and their patients and staff — in the Russian invasion that will enter its tenth month this week.

They have been in the firing line from the outset, including a March 9 airstrike that destroyed a maternity hospital in the now-occupied port city of Mariupol.

In the southern city of Kherson, which Ukraine recaptured two weeks ago, many doctors are working without power in the dark, unable to use elevators to transport patients to surgery and operating with headlamps, cell phones and flashlights. In some hospitals, key equipment no longer works.

On Tuesday, after strikes on Kherson seriously wounded 13-year-old Artur Voblikov, a team of health staff carefully maneuvered the sedated boy up six narrow flights of stairs to an operating room to amputate his left arm.

Malischchuk said three children wounded by Russian strikes have come to the hospital this week. Picking up a piece of shrapnel found in a 14-year-old boy’s stomach, he said children are arriving with severe head injuries and ruptured organs.

Artur’s mother, Natalia Voblikova, sat in the dark hospital with her daughter, waiting for his surgery to end.

“You can’t even call (Russians) animals, because animals take care of their own,” said Voblikova wiping tears from her eyes. “But the children … Why kill children?”