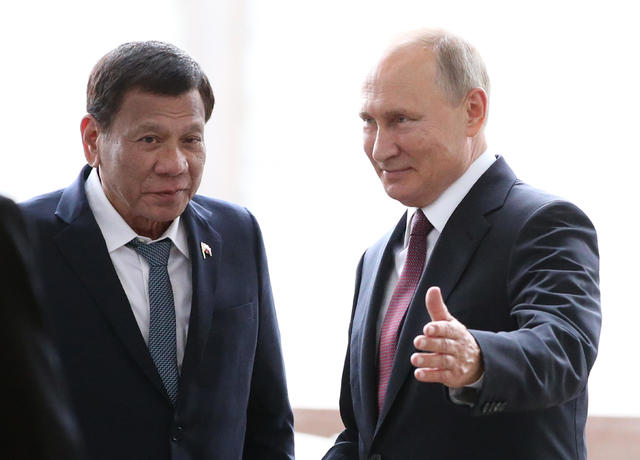 Manila (24/05 – 25.00) Outgoing Philippine President Rodrigo Duterte sharply criticised Russian leader Vladimir Putin for the killings of innocent civilians in Ukraine, saying while the two of them have been tagged as killers, “I kill criminals, I don’t kill children and the elderly.”

Duterte, who openly calls Putin an idol and a friend, voiced his rebuke for the first time over Russia’s invasion of Ukraine in remarks aired on Tuesday where he blamed the three-month old war for the spike in global oil prices that has battered many countries, including the Philippines.

While stressing he was not condemning the Russian president, Duterte disagreed with Putin’s labelling of the invasion as a “special military operation,” and said it was really a full-scale war waged against “a sovereign nation”.

“Many say that Putin and I are both killers. I’ve long told you Filipinos that I really kill. But I kill criminals, I don’t kill children and the elderly,” Duterte said in a televised weekly meeting with key cabinet officials. “We’re in two different worlds.”

Duterte, who steps down on June 30 when his turbulent six-year term ends, has presided over a brutal anti-drugs crackdown that has left more than 6,000 mostly petty suspects dead. Human rights groups have cited a much higher casualty and say innocent people, including children, have been killed in the campaign that Duterte vows to continue up to his last day in office.

The unprecedentedly massive drug campaign killings have sparked an investigation by the International Criminal Court as a possible crime against humanity. Duterte has said he expects to face more lawsuits arising from the drug deaths when his presidency ends.

Duterte and his police officials have denied sanctioning extrajudicial killings in the campaign against illegal drugs but he has openly threatened drug suspects with death and made an unsuccessful attempt to reimpose the death penalty in the largest Roman Catholic nation in Asia to deter drug dealers and other criminals.

When he took office in 2016, he reached out to Russia and China for trade and investment and to expand military cooperation while often criticising the security policies of Washington, Manila’s long-time treaty ally.

He visited Russia twice in 2017 and 2019 to meet Putin but cut short his first visit after Islamic State group-aligned militants laid siege to the southern Philippine city of Marawi while he was away with his defence secretary and military chief of staff.

Control your soldiers … They are on a rampage

More than a week after Russian forces laid siege on Ukraine, the Philippines voted in favour of a UN General Assembly resolution condemning the Russian invasion. The Philippines appealed for the protection of civilians and public infrastructure in Ukraine, although Duterte held back from strongly criticising Putin and said he would remain neutral in a conflict that could potentially lead to the use of nuclear weapons and spark World War III.

Addressing Putin “as a friend” and the Russian embassy in Manila, Duterte urged them to stop bombing and firing artillery rounds on residential areas and allow innocent civilians to safely evacuate before launching a bombardment.

“You are in control of everything. Anyway, you really started the ruckus there so control your soldiers strictly. They are on a rampage,” Duterte said.

Duterte said he was concerned about the stability of his country’s oil supply as the war in Ukraine continues to rage and spark global instability.

“I’m on the way out and I don’t know how to solve the problem,” Duterte said. “You have to solve the war between Ukraine and Russia before we can talk of even returning to normalcy.”