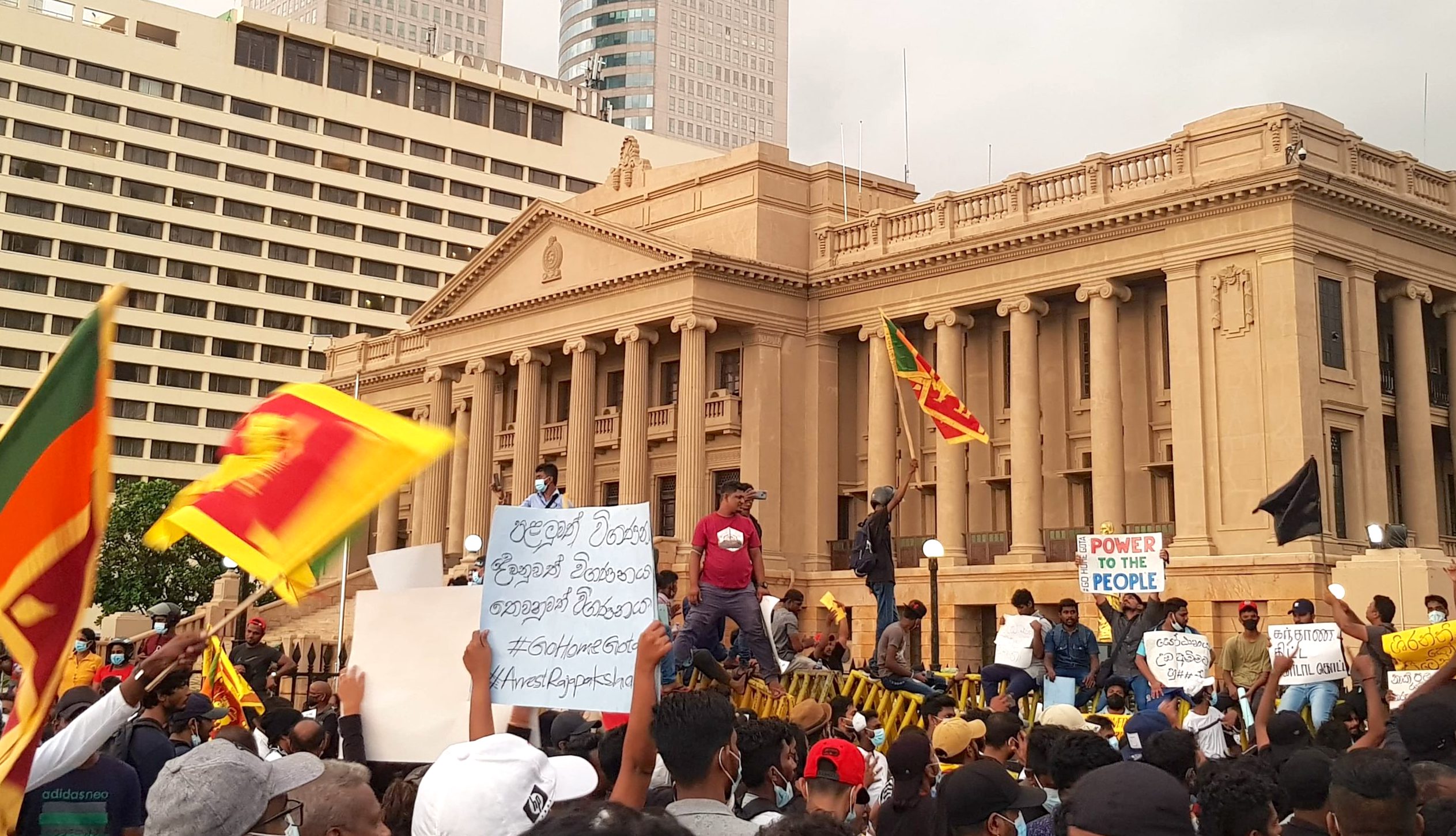 Thousands of protesters in Sri Lanka have broken through police barricades and stormed the president’s residence and nearby office in one of the largest anti-government marches in the crisis-hit country this year.

A Facebook livestream from inside the president’s house showed hundreds of protesters packing into rooms and corridors, shouting slogans against the beleaguered 73-year-old leader.

Footage of protesters standing and some bathing in the swimming pool inside the president’s home was widely circulated on social media.

Hundreds also milled about on the grounds outside the colonial-era white-washed building. No security officials were visible. The president has been moved to a secure but undisclosed location, reports said.

Thousands of protesters also broke open the gates of the sea-front presidential secretariat and the finance ministry, which has been the site of a sit-in protest for months, and entered the premises, TV footage showed.

Military personnel and police at both locations were unable to hold back the crowd, as they chanted slogans asking Rajapaksa to step down.

“Today is independence day for me being born in this nation, not 1948, because today we have fought for our freedom from the tyranny and the scoundrels and greedy politicians who have run our nation to ground zero,” a protester told Al Jazeera.

Prime Minister Ranil Wickremesinghe has called an emergency meeting of political party leaders amid growing anger over the government’s handling of an economic crisis.

Wickremesinghe also requested the speaker to summon parliament, a statement from the prime minister’s office said.

Wickremesinghe has also been moved to a secure location, a government source told Reuters news agency.

At least 39 people, including two police officers were injured and hospitalised in the protests, hospital sources told Reuters.

Reporting from Colombo, Al Jazeera’s Minelle Fernandez said the protesters are adamant the president must go.

“Tens of thousands of Sri Lankans are still streaming into Colombo… People stormed railway stations and literally forced employees to put them on trains and bring them to Colombo. They say they are taking their country back.”

Many in the island nation of 22 million people blame the country’s decline on Rajapaksa. Largely peaceful protests since March have demanded his resignation.

“I came here to chase away the president. The situation in the country is not good. He has to go for our country to come out of this abyss,” Gihan Roshan, 38, told Al Jazeera.

Sri Lanka is struggling under a severe foreign exchange shortage that has limited essential imports of fuel, food and medicine, plunging it into the worst financial turmoil in 70 years.

Months of protests have nearly dismantled the Rajapaksa political dynasty that has ruled Sri Lanka for most of the past two decades.

One of Rajapaksa’s brothers resigned as prime minister last month, and two other brothers and a nephew quit their cabinet posts earlier.

Wickremesinghe took over as prime minister in May and protests temporarily waned in the hope he could find cash for the country’s urgent needs.

But people now want him to resign as well, saying he has failed to fulfil his promises. One demonstrator held the Sri Lankan flag in one hand and a placard in the other that read: “Pissu Gota, Pissu Ranil” (Insane Gota, Insane Ranil) in Sinhalese.

Al Jazeera’s Fernandez said security forces responded with tear gas after university students and other members of the public congregated on a road leading to the president’s house.

“There’s been a heavy security and special task force presence. The comeback was completely over the top with tear gas canisters raining down to disperse the protesters. There was complete mayhem, almost a stampede to get out,” said Fernandez.

Police imposed a curfew in Colombo and several other main urban areas on Friday night but withdrew it on Saturday morning amid objections by lawyers and opposition politicians who called it illegal.

“Such a curfew is blatantly illegal and a violation of the fundamental rights of the people of our country,” said the Bar Association of Sri Lanka.

Despite a severe shortage of fuel that has stalled transportation services, demonstrators packed into buses, trains and trucks from several parts of the country to reach Colombo to protest against the government’s failure to protect them from economic ruin.

Discontent has worsened in recent weeks as the cash-strapped country stopped receiving fuel shipments, forcing school closures and rationing of petrol and diesel for essential services.

“The economy has collapsed. Most can’t have three meals a day,” Imasha Ranasinghe, a 22-year-old university student told Al Jazeera.

He is among the millions squeezed by chronic fuel shortages and inflation that hit 54.6 percent in June.

Political instability could undermine Sri Lanka’s talks with the International Monetary Fund seeking a $3bn bailout, a restructuring of some foreign debt and fundraising from multilateral and bilateral sources to ease the dollar drought.

Speaking from Colombo, economist Chayu Damsinghe told Al Jazeera he hoped the protests would bring in a change in the country.

“Once that change happens, once the heads at the helm change, there is some sense that policy change can actually be implemented and accepted by the people,” he said.

“Last time the people really protested, there was a real change. It is increasingly likely the president will have to take real steps towards change.”