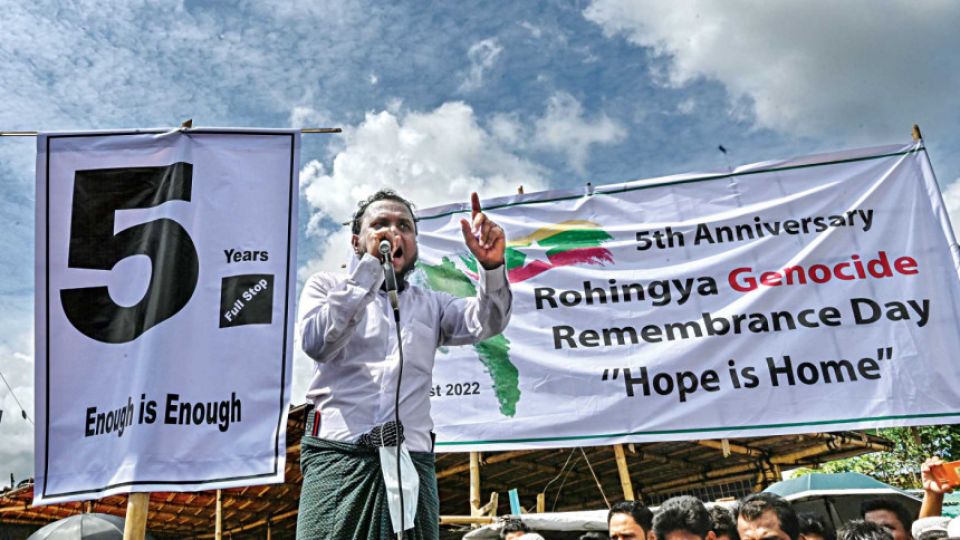 Fourteen foreign missions in Bangladesh, including that of the US and the UK, yesterday called for an end to the “culture of impunity” in Myanmar and reiterated their commitment to international accountability initiatives for the genocide committed against the Rohingya people.
Post Views: 95

Dhaka (30/08 – 22.22) Fourteen foreign missions in Bangladesh, including that of the US and the UK, yesterday called for an end to the “culture of impunity” in Myanmar and reiterated their commitment to international accountability initiatives for the genocide committed against the Rohingya people.

The US is working to significantly increase resettlement of Rohingya refugees from the region, including from Bangladesh, so that they can rebuild their lives in the US.”

Antony Blinken, US secretary of state

In a joint statement yesterday, they also said they continue to raise the plight of the Rohingyas on the international stage and seek solutions that would allow for the Rohingyas’ voluntary, safe and dignified return to Myanmar as soon as conditions allow.

In a separate statement, US Secretary of State Antony Blinken said the US would support a UN Security Council referral of the Myanmar situation to the International Criminal Court, apart from supporting the Gambia’s case at the International Court of Justice (ICJ).

He also reiterated its commitment to advancing justice and accountability for Rohingyas and the people of Myanmar in all credible courts around the world that have jurisdiction in cases involving Myanmar military’s atrocities.

“The US is working to significantly increase resettlement of Rohingya refugees from the region, including from Bangladesh, so that they can rebuild their lives in the US,” said Blinken.

Meanwhile, at a seminar on the Rohingya crisis in Dhaka on Aug. 25, Japanese Ambassador to Bangladesh Ito Naoki said his country is considering further possibilities of Rohingya resettlement in Japan with the guidance of UNHCR.

The UK’s Foreign, Commonwealth and Development Office in another statement said it imposed new sanctions against Myanmar’s military-linked companies to target the military’s access to arms and revenue.

“Our decision to intervene in The Gambia v Myanmar case and a further round of sanctions sends a strong signal of our continued support to seek accountability for the atrocities in 2017 and also restrict the military junta’s access to finance and the supply of arms,” UK Minister for Asia Amanda Milling said in the statement.

In September 2020, Canada and the Netherlands joined the Gambia to support the case filed in 2019. The ICJ on July 22 this year delivered a verdict that the court has jurisdiction to pursue the case.

The statements came on the fifth anniversary of the Rohingya influx into Bangladesh. Around 7,50,000 Rohingyas fled a brutal military crackdown in 2017.

The 14 missions said they noted with concern the reports of escalating violence and serious human rights violations by the military across Myanmar since the coup in February last year.

The missions of Australia, UK, Canada, Denmark, European Union, France, Germany, Italy, the Netherlands, Norway, Spain, Sweden, Switzerland and the US are signatories to the joint statement.

The missions said they have imposed sanctions on some individuals responsible for serious human rights violations against Rohingyas and would continue to push for a solution.

They also committed to continue to work together with Bangladesh, UN, and international and national partners, to ensure that Rohingyas receive humanitarian assistance, protection and education.

The statement also underlined the importance of supporting efforts to prepare Rohingyas for return to Myanmar, and continuing to support the host communities in Cox’s Bazar.

Blinken, who in March this year said the violence against Rohingyas amounted to genocide, said the Myanmar military regime’s recent executions of pro-democracy and opposition leaders is only the latest example of its abject disregard for the lives of the country’s people.

“Its [Myanmar military’s] escalation of violence has exacerbated the worsening humanitarian situation, particularly for ethnic and religious minority communities, including Rohingya, who continue to remain among the most vulnerable and marginalised populations in the country.”

The US has provided more than $1.7 billion to assist those affected by the Rohingya crisis in Myanmar, Bangladesh and elsewhere in the region.

Noeleen Heyzer, UN’s special envoy on Myanmar, yesterday called for the international community to increase support for a comprehensive solution to the Rohingya crisis.

“We cannot let this become a forgotten crisis,” she said while addressing a seminar on Rohingya crisis organised by the Centre for Genocide Studies (CGS) of Dhaka University at the Foreign Service Academy.

On the fourth day of her visit, she also assured of advocating for greater leadership by countries in the region to support Bangladesh and leverage their influence with Myanmar to create conducive conditions for Rohingya repatriation.

It was ultimately Myanmar’s responsibility to establish conducive conditions for the Rohingyas’ return, she said.

Heyzer highlighted the importance of education and vocational training for the Rohingyas to prepare them for their return.

At the seminar, Foreign Minister AK Abdul Momen said Bangladesh is bearing the burden of sheltering the Rohingyas, and a lack of strong action from the international community is prolonging the problem.

“If the crisis is not resolved quickly, it may create a security problem for the region and beyond,” he said.

Despite Bangladesh’s efforts, no Rohingyas returned to Rakhine due to the non-committal attitude of Myanmar. Starting their repatriation to Myanmar at the earliest should be a priority through dialogue and discussion, he said.

“The Rohingya crisis is not a bilateral issue. Its origin and solution lie in Myanmar,” he said.

Momen said the presence of ASEAN and international actors in Rakhine state can help build confidence of Rohingyas for smooth repatriation.