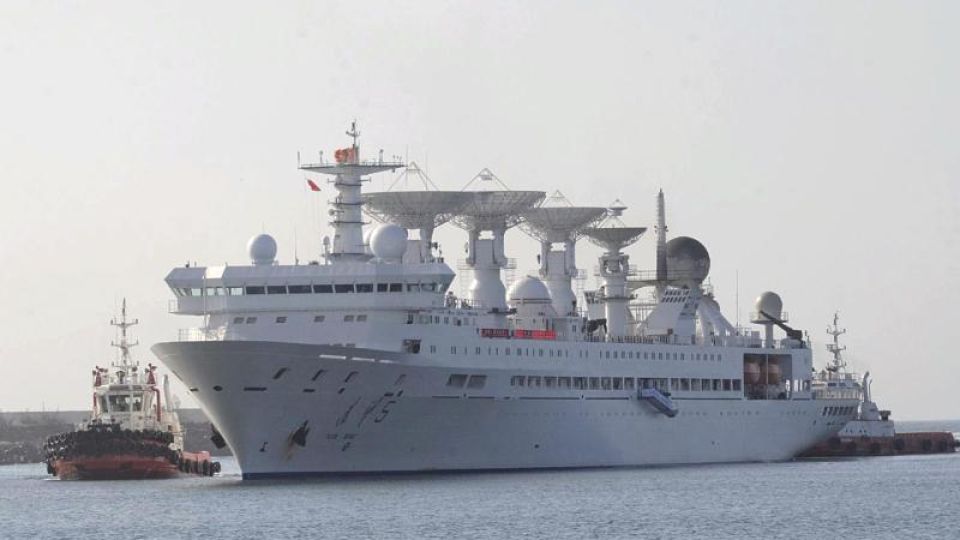 As China’s all-white Yuan Wang 5 research vessel slowly pulled into a dock at the southern Sri Lankan port of Hambantota on Aug. 16, it was greeted by a group of Chinese residents holding a large banner that hailed the friendship between Beijing and Colombo. Sri Lankan lawmakers also were in attendance as the captain and other crew members were welcomed with a traditional dance after disembarking from the vessel.
Post Views: 99

Colombo (31/08 – 40.00) As China’s all-white Yuan Wang 5 research vessel slowly pulled into a dock at the southern Sri Lankan port of Hambantota on Aug. 16, it was greeted by a group of Chinese residents holding a large banner that hailed the friendship between Beijing and Colombo. Sri Lankan lawmakers also were in attendance as the captain and other crew members were welcomed with a traditional dance after disembarking from the vessel.

The Chinese ship’s arrival, reportedly for refueling and resupply through Aug. 22, was not warmly received everywhere, however. At a time when there are mounting concerns Beijing might use the port for military purposes as it seeks to expand its influence in the Indo-Pacific region, this port call has gotten on the nerves of regional power India and China’s rival the United States.

The port opened in 2010 in the home district of then Sri Lankan President Mahinda Rajapaksa, who favored China, and was developed as a crucial part of Beijing’s Belt and Road Initiative mega-economic zone. The total project cost of about $1.5 billion (about ¥200 billion) was funded mostly through Chinese loans, which reportedly came with interest rates of more than 6%.

In 2017, the Sri Lankan government was drowning in debt and decided to sell a majority stake in the new company that operated and was in charge of security at the port to Chinese state-owned enterprises on a 99-year lease. China had effectively acquired the right to operate Hambantota port.

In recent years, China has provided huge loans to developing nations for infrastructure construction and other projects. This has pushed many of these nations into so-called debt traps in which the borrower falls behind in repaying these loans, amid high interest rates, and hands China the right to operate the infrastructure or some other benefit. Hambantota port is said to be a classic example of this.

The Chinese company that now runs the port stated that foreign ships “require government approval” to enter and explained that authority over port calls rests with Sri Lanka.

In an exclusive interview with The Yomiuri Shimbun, Sri Lankan President Ranil Wickremesinghe insisted that China would not be allowed to use the port for military purposes. However, he did not deny the possibility that Chinese military vessels might enter the port to refuel.

Sri Lanka has downplayed mounting U.S. and Indian concerns about China’s activities. It is true, though, that Sri Lanka does not want to harm its relationship with China, which is Colombo’s largest creditor nation.

The COVID-19 pandemic has battered Sri Lanka’s vital tourism industry and left the nation with a foreign exchange shortage. Sri Lanka’s reliance on imported fuel and other goods caused shortages that exacerbated its economic crisis.

The government halted foreign debt repayments and effectively fell into default, while widespread hardship among the public fueled mass protests. Cooperation from the United States and India will be essential for alleviating Sri Lanka’s economic crisis, but Colombo must give consideration to both these nations and China at the same time.

Footholds in Indian Ocean
As the United States and India bolster cooperation through initiatives such as the Quad, which also includes Japan and Australia, China is aiming to boost its presence in the Indian Ocean.

Beijing is paying increasingly close attention to this ocean because these waters are essential for what it views as a new domain from a military perspective: space development. China’s military is heavily involved in this domain. The Yuan Wang 5, which belongs to an organization under the military umbrella, can monitor launched rockets and satellites to record, detect and change their trajectory. The vessel also is involved in China’s BeiDou, which like other positioning systems was originally developed for military purposes. According to Chinese media, the Yuan Wang 5 even controlled a Chinese space station lab module launched in late July.

China relies on imports for more than 70% of its crude oil and at least 60% of these imports traverse Indian Ocean sea-lanes. At a time when the United States and India are enhancing their cooperation, China is increasingly recognizing that protecting these sea-lanes is an important issue. Sri Lanka sits at a vital location in the Indian Ocean where Asia, the Middle East and Europe connect. Hambantota port could become a strategic asset for China because vessels there can quickly sail to the seas off both the east and west coasts of India.

The development of port facilities in Pakistan and Bangladesh, and the expansion of a naval base in Ream, Cambodia, have all been assisted by China. This has given Beijing a string of footholds across the Indian Ocean. There is strong speculation that China’s military base in Djibouti was constructed with the objective of extending the reach of its warships.

A diplomatic source in Beijing warned that the Yuan Wang 5’s arrival in Hambantota port was a prelude of things to come.

“Other ships will be allowed to dock there. There’s no doubt China is trying to make its use of this port an established fact,” the source told The Yomiuri Shimbun. “It’s even possible destroyers and other such vessels will dock there in the future.”

New Delhi fumes over ‘spy ship’
India has bristled at the Yuan Wang 5’s arrival at Hambantota port. New Delhi conveyed its concerns over the ship’s docking to Colombo, and Indian media have described the research vessel as a “spy ship.” Recent media coverage has constantly been critical of the port call.

New Delhi is alarmed that the Chinese vessel could monitor its military activities. In 2012, India conducted the first successful test-launch of the Agni-V long-range ballistic missile from a facility in the eastern state of Odisha. With a range of about 5,000 kilometers, this was the first Indian missile capable of reaching every part of China. The Yuan Wang 5 is reportedly equipped with satellite surveillance radar that could also monitor ballistic missiles.

“If Chinese military vessels frequently dock at the port, China would be able to observe the movements of all our ships and our nuclear-related facilities,” a senior Indian Defense Ministry official said to The Yomiuri Shimbun.

India and China have in recent years entered into serious conflicts. Military tensions have flared at times, including in June 2020, when both militaries clashed over the undefined border that runs through the Kashmir region. Unease about China has spurred India to augment its military, and New Delhi will soon commission its first domestically made aircraft carrier.

The Yuan Wang 5’s arrival at Hambantota port also has vexed the United States, which considers the Indo-Pacific region to be of the utmost importance. According to The Washington Post, U.S. and Indian officials worked together behind the scenes to pressure the Sri Lanka government to revoke access to the port, but to no avail.