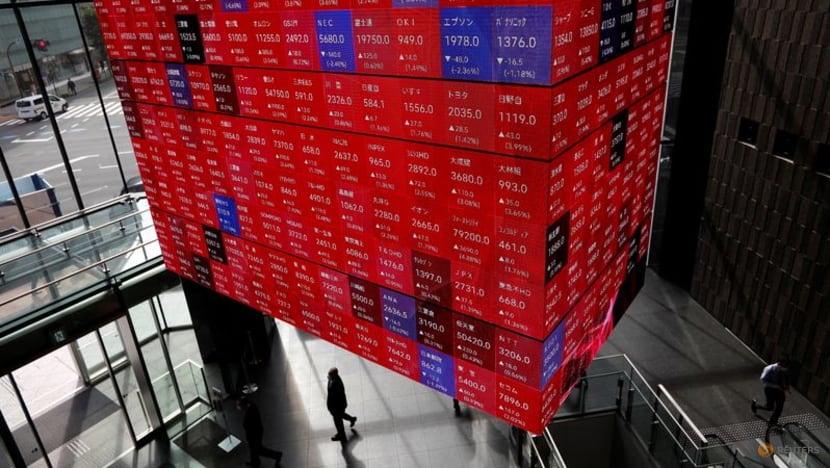 Asian shares tumbled, the dollar held firm and two-year Treasury yields hit a new 15-year high on Wednesday (Sep 14), as a US inflation report dashed hopes for a peak in inflation, fuelling bets rates may have to be raised higher for longer.
Post Views: 90

Sydney (16/09 – 20.00) Asian shares tumbled, the dollar held firm and two-year Treasury yields hit a new 15-year high on Wednesday (Sep 14), as a US inflation report dashed hopes for a peak in inflation, fuelling bets rates may have to be raised higher for longer.

US Labour Department data showed on Tuesday the headline Consumer Price Index gained 0.1 per cent on a monthly basis versus expectations for a 0.1 per cent decline. In particular, core inflation, stripping out volatile food and energy prices, doubled to 0.6 per cent.

Wall Street saw its steepest fall in two years, the safe-haven dollar posted its biggest jump since early 2020, and two-year Treasury yields, which rise with traders’ expectations of higher Fed fund rates, jumped to the highest level in 15 years.

MSCI’s broadest index of Asia-Pacific shares outside Japan fell 2.1 per cent on Wednesday, dragged lower by a 2.7 per cent plunge in resources-heavy Australia, a 2.4 per cent drop in Hong Kong’s Hang Seng index and a 1 per cent fall in Chinese blue chips .

After a heavy equity selloff overnight, both the S&P 500 futures and Nasdaq futures rose 0.3 per cent. On Tuesday, the Dow Jones Industrial Average plunged 3.94 per cent, the S&P 500 lost 4.2 per cent, and the Nasdaq Composite dropped 5.16 per cent.

“Markets have reacted violently to what I would consider to be a modest miss in US CPI,” said Scott Rundell, chief investment officer at Mutual Limited.

“Futures have stabilised, so we might see a dead-cat bounce tonight.”

Financial markets now have fully priced in an interest rate hike of at least 75 basis points at the conclusion of the FOMC’s policy meeting next week, with a 38 per cent probability of a super-sized, full-percentage-point increase to the Fed funds target rate, according to CME’s FedWatch tool.

A day earlier, the probability of a 100 bps hike was zero.

“USD rates are now pricing in a Fed funds rate of 4.25 per cent by end-2022 (75bps, 75bps, 25bps for the remaining three meetings). Decent odds of a 4.5 per cent peak early 2023 is also reflected,” said Eugene Leow, senior rates strategist at Deutsche Bank.

“While resilient growth and slowing inflation can make for a better risk-taking environment, the US economy now looks too hot still. With no clear signs of the labour market slowing and inflation still problematic, a downshift from the Fed looks set to be delayed again.”

In the currency markets, the US dollar held firm against a basket of major currencies at 109.8, after jumping 1.4 per cent overnight on the surprisingly strong US inflation report.

It hovered close to its 24-year peak against the rate-sensitive Japanese yen at 144.4 yen. The yen has been a victim of the dovish monetary stance from the Bank of Japan, in contrast with rate hikes elsewhere.

The two-year US Treasury yield scaled a new 15-year high of 3.8040 per cent on Friday before retreating to 3.777 per cent, and its curve gap with the benchmark ten-year yields hovering around 34 basis points, compared with just 16 bps a week ago.

The yield curve inversion is usually treated as a warning of recession.

Oil prices recovered some ground on Friday, after falling in the previous session. US crude settled up 0.3 per cent at US$87.57 per barrel and Brent settled at US$93.38, up 0.2 per cent on the day.